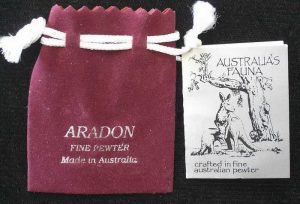 Of the approx 250 species of shark found worldwide, more than 90 species can be found in Australian waters.  Sharks evolved about 305 million years ago from a now exctinct group of armour plated animals known as Placoderms.  Today the armour has given away to a more flexible and mobile body, the skeleton of the shark being made entirely from cartilage instead of bone.  sharks can range in size from a tiny 23cm (Dwarf Shark) to a massive 18 metres in the cast of the Whale Shark, the worlds largest living fish.  Probably the most well known and most feared of all sharks, is the White Shark or White Pointer.  These sharks can grow in excess of 6 metres long and have acquired a reputation as man eaters.

Since earlier times, craftsmen have been extracting a small amount of a shiny precious metal (Tin) from a mass of rock, and then using that metal to manufacture articles to decorate their homes.

Tin is the fourth most valuable metal in general use, after Platinum, Gold and Silver, and has been used to manufacture Pewter since those early times.

Modern Pewter is an alloy that contains 92% Tin, 6% Antimony and 2% Copper.  The Antimony is used to harden the alloy, and the Copper is used to improve its workability.

To maintain the finish of your Pewter articles, wash in hot water using liquid soap and rinse in almost boiling water.  Immediately dry and polish with a soft cloth.

There are no reviews yet.

Be the first to review “Pewter Shark -Small” Cancel reply